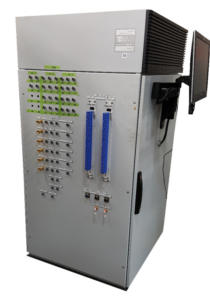 Minimize the stress and maximize the success of the development and changeover of the new test system.

We’ve got a very similar webinar on this topic if you’d prefer to watch as opposed to read.  See here: Upgrading Obsolete Manufacturing Test Systems Webinar. If you just want to see how we can help with updating your obsolete test system, see Test System Migration – replacing and upgrading obsolete test systems.

In our experience, test systems typically go obsolete after about 10 to 25 years of use.

Obsolescence can be due to SW or HW or both.  Some typical reasons to upgrade an obsolete test system include:

Here are two charts illustrating the most pressing reason to upgrade an obsolete test system, first from our experience, and then from responses we received from a webinar that we presented on this topic. 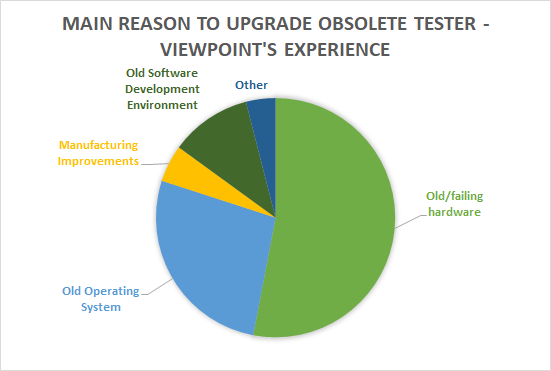 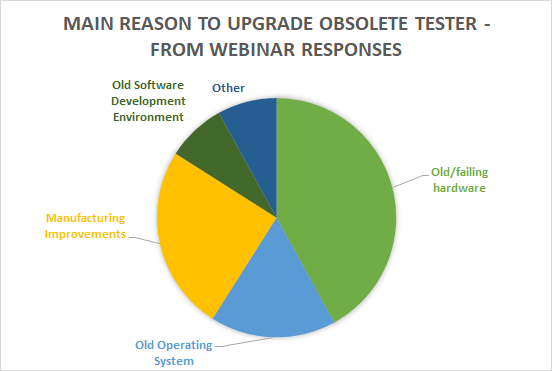 It’s pretty typical that a company starts to consider upgrading an obsolete test system when a component starts to fail or becomes hard to replace.  When that happens, you have two choices: either get around the troublesome part(s) by patching the test system or you can replace the entire test system. Our experience shows that most companies start by patching, using a little quote-unquote “duct tape” to make the system operational for a few more months or years. There is absolutely nothing wrong with this “duct-tape” approach (also called staged upgrades) if it is done with some thought and planning.

And, our experience shows that if a company has used duct-tape once, they will likely use duct-tape again. That’s fine and with some thought and planning, it’s worth keeping some components of the old tester. Eventually, you will want to go down the other path of complete replacement. But, maybe you don’t want to keep duct-taping and you’d rather plan for a complete upgrade now.

How do you decide which path is best and when to follow it? You need to review the life cycle of the tester components to see if a duct-tape solution is viable and reasonable. This review will help you prioritize the upgrade needs. Likely you will find some parts of the test system that should be given a priority during the upgrade versus others parts that can be delayed or reduced in scope.

For example, maybe the IT department wants you to upgrade the OS. After analysis of the hardware components, you find that hardware is going to be available for a long while and, better yet, drivers for this hardware are still available. So, with some minor patching of the test application software, you’ll be able to keep the rest of the tester and not have to upgrade the entire system.

On the hardware side, the number of spares you have at hand will affect your decisions too, since you might be able to handle replacement of an obsolete component for many years. Or perhaps you can make a last-time-buy of any component going end-of-life.

Pay attention to any interactions between the tester components.

A little duct tape might be just the thing to do the trick!

Let’s discuss the most important part of any obsolescence test system upgrade, which is the reverse engineering step.  If you are extremely fortunate, the builders of the existing test system will have left comprehensive, up-to-date documentation, complete with:

Oh, all that documentation is correct too. Even if it has redlines and markups, the people who built the existing test system documented all of it!  I’ve never seen such a situation – it’s rare at best – so, the system usually needs to be reverse engineered.

Especially important in any Reverse Engineering process is attention to detail.

A seemingly inconsequential item can result in unexpected behavior in the new system.  Let’s talk though some important parts of a test system that need to be considered for a successful reverse engineering effort.  We could spend hours talking about reverse engineering, it’s that important. But, I think I can give you a good overview here.

You want to look at everything the signal is subject to starting with the sensor and ending with A/D values. You’ll want to consider information such as:

How is the test stand used?

How is the measured data processed?

Understand how the UUT is assessed.

Should you keep the original UI or change it to enhance the User Experience?

You need to review every type of file ingested or produced by the existing test system.

Be ready for differences between results obtained from the old and new systems. This topic is big enough that it gets it’s own section later in this paper.

And, most of all, remember that detail is important! Don’t assume anything.

Let me give some brief examples which illustrate the need for details. Viewpoint Systems has learned the hard way that you *really* need to be diligent in this Reverse Engineering step.  Here are three representative examples of obsolete test systems that we’ve reviewed:

These examples show that reverse engineering is challenging with varied considerations and design paths. How will you know the best path forward? Don’t make assumptions – ask questions!

Insight #3: How to Minimize Impacts To Production

It would be awesome if replacing the old test system with the new tester was as simple as:

In reality, though, production will be impacted.

Our experience is that the cut-over between old and new testers can be as little as 1 day and as much as few weeks.

Of course, during this time, the manufacturing people will be breathing down your proverbial neck the whole time.  Thus, it’s important to understand the impact to production and ways to minimize that impact.

In easy situations, the existing test system can be quickly put back into production if the new tester has issues. In difficult situations, the old tester is an integral part of the production line. Removing it is a laborious process and it’s practically impossible to return it to operation.  For these situations and everything in between, the best method to reduce production impacts is to do as much debugging as possible before the cut-over.

Let’s review a few ways to make sure that the new tester is as debugged and verified as reasonably possible prior to replacing the old tester.

For a simple swap, debugging and verification should typically include the following items.

In addition to these debugging steps, two other items should be considered that apply to both scenarios.  First,

use your estimate for the time it will take you to bring up the new tester and double or even triple it,

because things never go as easily as planned. Tell production management about this downtime. They may want to consider an inventory build-up to buffer any unexpected production outages.

And, if the new test system needs to undergo a re-certification that involves sign-off by the end-customer (often seen for the production of military or aerospace components), be sure to engage them prior to placing the new tester into the production line. This engagement is important because

re-certification can be a significant portion of the overall upgrade of the test system effort, sometimes as much as 50% in our experience.

Insight #4: Old vs New – How To Prepare For Differences

Let’s assume that the new system has been debugged and we are ready to validate it’s operation.

One of the most perplexing outcomes after installing a new test system is explaining the different results between the old and new testers.

Not every obsolescence upgrade shows these differences, of course, but enough do that it’s worth discussing ways to prevent or at least reduce the resulting confusion. Note that this review of the possible differences induced by the changes in old and new hardware and software should be done in the reverse engineering stage.

Some examples from actual upgrade projects will help describe the issues:

These examples illustrate the importance of understanding that the new test system will act differently than the old one and may even interact with the UUT differently.

Now for some recommendations on handling differences produced by the software.  The biggest concern for software when upgrading an obsolete tester is when the original source code is not available. You don’t want to have to guess how the measured data is being processed and analyzed. So it’s clearly better if the old source code is available.

Let’s talk about the situation of when the code is available. You may still stumble right out of the gate. What do you do if the application was developed in an environment that is unavailable now, like an old VB6 app? You may have to go through some hoops to be able to use that source code. Eventually, you will get the source code in good shape and can open it in a modern development environment.

When that happens, you should develop some white box testing around the old and new code to make sure that the results match.

The hardest situation is when the source code is *not* available. What do you do now? In our experience, the best you can do is to reconstruct the software that automates the test steps.

If *no* documentation is available, we’d recommend that you work with the manufacturing engineer and test operator to observe the old tester operation step by step to develop a new set of test requirements. And, as a word of caution, even if there *is* documentation available, we recommend you do the same thing simply to validate that any documented information is up to date and if not to update it as needed. In either case, you will want to run additional tests on the old system to understand it’s operation which will take time away from production.  This situation is not ideal and you can almost guarantee differences between the old and new tester. But, with careful review, and detailed reverse engineering, even in this situation, differences can be reduced or maybe even eliminated.

After you’ve done your best to minimize the differences between old and new testers, how do you verify that they are both quote-unquote “close enough”?  There are three methods that are used often.

Before following any of these methods, you need to be sure that both old and new systems are calibrated.

Insight #5: The Importance of a Tech Refresh Plan

If you already have test systems that are older than 3-4 years, you should do the review now, especially if the people involved in the original build are about to retire or otherwise leave their position – you don’t want to lose their knowledge.

Then, establish a cadence of around 4 years to review the test equipment using the Tech Refresh Plan as a guide.

What if you’ve already recently upgraded an obsolete test system? Then you should use the Tech Refresh Plan at that same roughly 4 year interval starting the countdown clock now.  There are 5 main areas covered in a Tech Refresh Plan:

Check out our tech refresh plan checklist to fill in the details behind these topics.

A Tech Refresh Plan is a guide for the people concerned about longevity of the test equipment. The basic idea behind this guide is to walk this group of people through a set of questions that consider why the test system might be need to be upgraded, what components make the most sense to upgrade, how might you accomplish that upgrade, how are you going to pay for it, and when.

A Tech Refresh Plan should be done on a periodic basis so you can react calmly to any parts becoming obsolete. We recommend a cadence of around 4 years, starting now if you’ve never done one.   Check out this tech refresh plan checklist to make sure you’re considering the major items.  If you’ve got an obsolete (or soon-to-be-obsolete) test system and want to chat about options, you can reach out here.  If you’d like more useful info on automated test systems, check out our resources page.