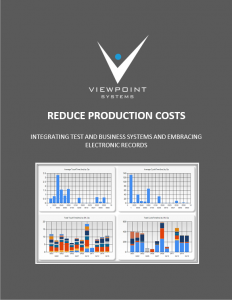 However, many companies produce a wide range of parts in small quantities. This high-mix, low-volume manufacturing is often coupled with parts that are highly complex, so that assembly and testing is described by long procedures. Such parts are often tested manually with test results captured on paper or in data files local to a test machine. Despite the well-known detractions of manual testing, this approach is accepted because the cost of an automated test system is thought to be too high, especially when each part is thought to need a unique test system.

In this paper, we discuss an alternate approach for low-volume, high-mix part manufacturing that embraces manual testing with electronic records by replacing paper with files and databases for use in assembly instructions, test records, and production status. By combining electronic test results from the test equipment with information on work orders and manufacturing flow from the business systems, we have seen marked improvements in manufacturing efficiency in low-volume, high-mix product manufacturers, such as aerospace parts suppliers, medical device manufacturers, and military electronic assemblies. This improvement happens with manual or semi-automated test systems, not complete automation. Thus, the cost of the test system is much less than usually expected and, hence, the benefits are more easily cost-justified.

In this report we will provide some basic answers to the following questions:

Here is a list of abbreviations used in this report.

Companies dealing with low-volume production often consider test automation to be cost prohibitive. Tests are typically done manually with minimal or no automation. And, measurement records are put on paper or into a secluded data file.

Automated test platforms running COTS test executives are often designed for high-volume production and don’t meet the needs of the situations of manual and semi-automated testing. Furthermore, low-volume production is often correlated with a need for strict control over measurement records because regulations or liability concerns put high value on the ability to retrieve the measurements recorded from a specific part long after it has been sent to the customer. Finally, because test results produced by these manual or partially automated test platforms are often less accessible, opportunities to improve the production process can be missed.

While the discussion necessarily remains high-level due to confidentiality restrictions with most of our clients, we are able to report the specific results from one client that has agreed to share important performance metrics. This client is a manufacturer of low-volume and high-mix aircraft and space electronics and avionics, and will be referenced as the Aerospace client.

Many of our high-mix and low-volume clients had previously managed production by traditional means, with paperwork assigned to each production unit and operators performing inspection of the unit as it was assembled manually. Manufacturing assessment was made by manual weekly tally of production volume at each assembly station and issues encountered during assembly.

Because of the high-mix production environment, multiple whiteboards filled with production status were often scattered around the production floor to help management address critical issues. Significant labor was involved in maintaining and assessing current information on these whiteboards. Furthermore, written material was almost everywhere. Assembly work instructions and resulting test data were written on paper that traveled with each unit. As tests were performed, resulting measurement data was recorded manually, often on paper. The chance for error was significant. When questions arose about the status of a particular unit, many hours could be spent in locating and evaluating the paperwork.

By integrating the business database (BDB) with a test executive (TE) and a test results database (TDB), manufacturers have been able to reduce production costs. Specifically, the Aerospace client saw an average of 30% cost reduction across many product lines.

The automation of transactions between a TE, a TDB, and the BDB greatly enriches the ability of a manufacturer to improve both the manufacturing process flow and part quality.

The payback on the development cost for this type of integration depends strongly on the number of different product groups that are supported because this count is almost linear with the level of development effort. But, also important, is the amount of effort to create and make accessible queries that the TE and TDB can use to access the BDB.

For our Aerospace client, the payback was estimated to be about 1.5 years. Furthermore, installation time for upgraded test stations is typically between 1 to 4 weeks, depending on the complexity of the part being tested. Table 1 shows efficiency gains in various areas of manufacturing management. These gains total to about 30%.

In addition to the gains in management efficiencies, production gains are possible because, with test and assembly results placed in the databases, managers can perform statistical analysis of production bottlenecks and identify the most effective corrective actions at the business level. Management of subassembly BOMs and assembly instructions, with associated test steps and results, offer a clear understanding of manufacturing improvement opportunities. Specifically, our Aerospace client now manages seven times the production volume as 10 years ago without significant increase in production personnel.

Without the rapid access to the test and assembly data provided by these automated database transactions, manufacturers were previously wasting significant time locating status information or identifying problem areas. Worse, some production problems were never addressed due to the attention required by the immediate “fire fight” of the day.

Assembly errors were reduced and traceability was improved, leading to accolades from the customers of the manufacturers.

The initial effort in improving manufacture processes requires an understanding of the products to be tested and the business database (BDB). The BDB contains work orders, bills of material (BOMs), assembly status, and so on. The test executive (TE) and combined test database (TDB) are configured to accommodate these products and to interface to the BDB.

Furthermore, the test database should be designed to handle arbitrary data types, such as the combination of device test data and manufacturing history. 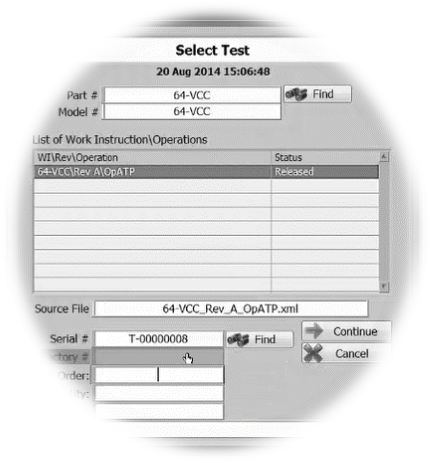 For each part being tested, the work instructions and all test results should be associated with unique identifiers for the specific unit being tested (such as a part serial number), the part type, operator, test station, and work order.

For ease of use, the manufacturing engineer should be able to create work instructions from pre-built test step types, such as “Read Voltage”, “Manual Measurement” and “Notes”, so that the work instructions can be created without engaging the supplier of the test equipment for support. Figure 2 shows an example. 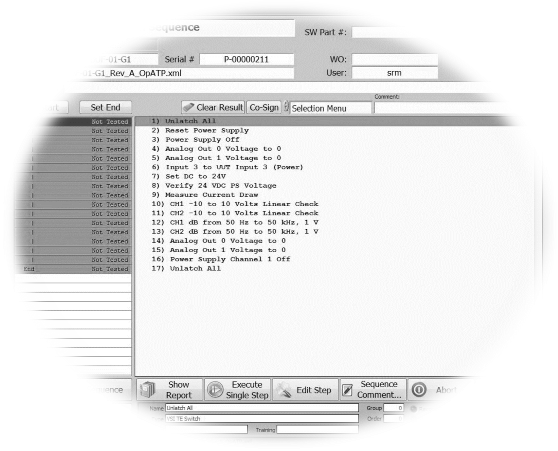 Access to work instructions should be restricted by user privileges (in addition to release status), thus controlling access to sequence execution, creation, and validation procedures.

Detailed test results should be stored in a common format, such as XML, and common data files, such as TDMS and/or XML, while summary data are stored in the TDB for statistical analysis. See Figure 3 for an HTML-based report from one part. The report should allow both review and linked access to the specific results for each step. 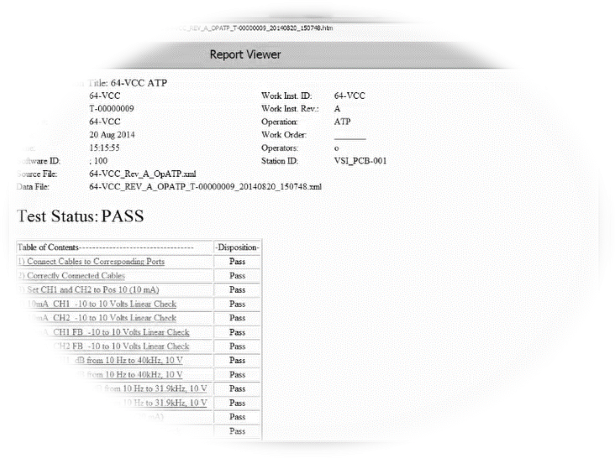 A test database (TDB) tool integrates tightly with the TE to archive all the test and assembly data. For flexibility, it is often beneficial to choose a NoSQL database for the TDB.

A NoSQL database has proven to be an improved solution for our clients for two main reasons.

First, NoSQL provides flexibility in the types of data that can be stored. In contrast, most relational databases restrict data to specific types, such as number and text, while placing uncharacterized data into binary entities, which can be hard to retrieve for all but the original application. Second, NoSQL is naturally adaptable to changes in data relationships by creating and deleting links to items in an unstructured tree. ‘

The TDB is used to catalog and collate results of tests along with part types and work instructions. Specifically, results are pulled from the TDB for analysis of Cpk trending, time studies, process yield, control charts, and so on. For example, Figure 4 shows a sample trend chart. The test name has been blurred for confidentiality reasons.

The benefit of using a NoSQL-based TDB for these seemingly tabular relationships appears after several months or years of accumulated data during which time the relationships and test result descriptors can change. Such changes typically cause problems in the maintenance of traditional SQL relational databases.

Furthermore, it is useful when the TDB provides a screen where queries can be created without programming. Odd and unexpected concerns can be analyzed manually.

The client’s main business database (BDB) is a SQL-based Manufacturing Resource Planning (MRP) tool. The database is queried for information about the work order under which a part is being tested and stores pertinent test result information for each part. The business database can then be queried for production performance, such as Work In Progress (WIP) review and Overall Equipment Effectiveness (OEE) for the production test equipment. For example, the client can detect production blockages and alleviate them by assigning personnel to the bottlenecked test stations.

Furthermore, the TE updates the MRP automatically with the status of any work order that has been passed through any test system. Some companies manage these updates via a paper-based traveler/router, but pushing this information automatically and electronically into in the BDB allows the MRP users accurate and nearly instantaneous visibility on the status of production. For example, this automatic update allows the manufacturer to query the MRP for the status of WIP in minutes rather than the hours the effort would consume prior to this test and business system integration.

The graphs in Figure 5 are an example report from our Aerospace client illustrating this report automation. 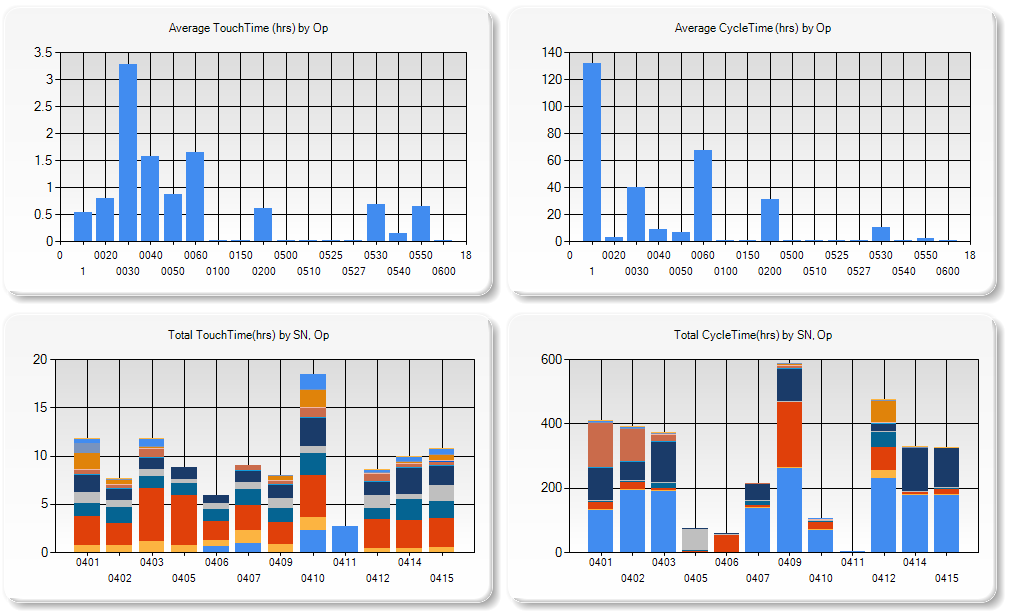 Other databases likely support the business system MRP. For our Aerospace client, one very important database maintains the device history of assembled products. This database enables comparison of products that are in-process (production is controlled) and out-of-process (production is out of control). Information on out-of-process parts is vital to improvement of process flow and upstream feedback to design engineers by analyzing failure modes and pass/fail tolerance limits.

If you’d like to see how we can help you reduce your manufacturing costs, you can reach out here for a consultation.

Yes, I want to chat about how I can reduce my manufacturing costs »