Universal Test Equipment – An Argument against it

Universal Test Equipment – An Argument against it

Universal Test Systems are like multi-tools: jacks of all trades but masters of none.  They work for those occasional, easy, common unplanned problems but struggle after that.  Test stations that claim to be universal testers are very often very similar to multi-tools.  They work well when your problem set is common, well scoped and unknown.

Common testing needs are ones where both the test performed on the product and the interface to the product are the same.

If the test and the interface are all the same then the tester can accommodate multiple products.  But what happens when your products vary in their interface or the testing they need?  You have to add more functionality to accommodate the variance.  Driving up cost and complexity.

A well-scoped test setup is one that is able to perform a variety of tests common to a grouping of products.  It doesn’t mean perform all tests on all products.

When you do it all you will be a master of none or just not be able to do it all.  Being able to do everything initially might be possible, but require a lot of effort in development.  Then when you are finally finished, your product changes or evolves, meaning you have to modify your test station design.

A universal tester is a relative thing.

Company 1: makes 100 products that all do the same thing and have a standard interface to the test station

Company 2: has 20 products but they all do different things and have nonstandard interfaces.

Company 1 may do fairly well developing a universal test station.  All their products run the same types of tests so the equipment in the station will work for all products.  They also have a standardized interface to the test station allowing for the control and measurement of the products to be simplified.  This may equate to being able to use the same communications method for all products or time savings of not having to develop a custom interface for every product.

The reality is that for most companies (those more like company 2) this is not possible due to the evolution of product design or just the variety of products manufactured.   Even though company 2 makes a smaller subset of products, they’re going to have much more difficulty putting together a universal tester.  The variance of what the products do means they need different types of tests necessitating different equipment in the station.  Introducing switching may mitigate this, but that increases complexity, and in some cases can affect the measurements.  Without standardized interfaces for the products, a new test fixture/interface needs to be designed for every product to connect it to the test station.

The takeaway from all of this is that:

you really need to understand your company’s entire product line and create logical groupings based on types of tests and interfaces.

Base test system design around that instead of creating one test station for everything.

Challenges with a Universal Test System

If you do decide to build a universal test station, it can be a significant challenge both technically and financially.

One of the side effects of having a universal test station with all the hardware you will ever need is underutilized equipment.  If you are not using equipment in the station for most of the test of your product, then it might not be the most effective approach for manufacturing test.

For example, you have a device with a LVDT, RVDT, and power output interface.  A universal test station is built to test these three interfaces necessitating two pieces of equipment, an active load for the motor output and a power supply and DMM for the LVDT and RVDT.  You start testing and realize that the active load and DMM are only used for half of the test.  The rest of that time the equipment is sitting idle, wasting time and money.  The device or station may not allow for the ability to test using both pieces of equipment at the same time, and making the station a multiple unit tester increases complexity and cost.  Maybe it would have been better to make two stations at this point. One for the LVDT and RVDT testing, and one for motor output testing.  This way the equipment is being used 100% on both stations while testing two different units, without adding hardware or software complexity.  It may not always be possible to get 100% utilization out of all equipment during test, but striving for it should be a goal.

One could argue that the time it takes to connect the unit under test justifies having a universal test station.  Your device may have connections that take a long time to make or have low insertion counts.  A counter argument to that is that you create test carriers for each product you have.  The carrier just takes the signals from the device and routes them to a common connector back plane that could be used on multiple stations.  There would just need to be a unique carrier for each unique product interface.  Carriers can save test time if the connection to the station is quick and simple.

A further benefit is if the products can be designed with a standardized test connection.  This requires less unique test carriers, which saves time and money on the development of new carriers to connect the product to the test station.

Another consideration when having lots of different equipment in a station is validation.  Even though only a fraction of the test system is being utilized to test any one product, the entire system needs to be validated and verified.  This can be very time-consuming depending on the number of interfaces there are, and how they need to be tested.  Keeping the station streamlined to the function it is testing will help avoid these issues.

Now your company creates this great new product with functionality that is not able to be tested with your current universal test stands.  What are you going to do to resolve this?   Most of the time to resolve this, companies spend money to buy additional instrumentation and add it to their hardware standard.  Ok great, problem solved.  Except you have a new device next year that has the same requirement.  So you add more equipment to your ever growing list of standard hardware.  All of a sudden your hardware standards are not really standards anymore because they are constantly changing to meet the requirements of new products.

You could update all your test stands with the new equipment so they are the same, but that could be cost prohibitive or not make sense if you never plan on testing those new products on all your stations.  So what usually happens is that these stations become variants of your universal test stand and have some subset of test functionality specialized for certain products.  This situation repeats and you end up with all these changes creating variants of your “universal” test station.

If you are constantly making variants you have to ask yourself is this station truly universal?

So, what can be done about this?  Start with categorizing products into test type groups.  For example, maybe half of the products are in need of power load testing.  Create a test station that focuses on power load testing using a standardized carrier interface.  Keep the test station as simple as you can but scoped for only that function.  If a new product is created that necessitates updates to the power load station, it will be much less expensive to just update that station type instead of the universal test station.  Doing the same update to a universal test station could just increase the complexity of the station both in hardware and software.  More power switching or software updates may be needed to cram in yet another variant.  Some hardware and software updates would be expected on the power load focused station, but probably significantly less than cramming it into the universal station standard.

It can be harder to keep a universal test station up to date.

You could spend years and thousands of dollars developing your solution only to have it be obsolete once you are complete.

When your universal test station breaks or is outdated

Having a singular universal test station can be very expensive when the system goes down for unplanned issues.  Yes, when it goes down.  Obviously, it’s good practice to do planned maintenance on a system to minimize unanticipated shutdowns of your test systems, but sometimes unforeseen things happen.  If and when the system does shutdown due to an issue, it will take more time getting it back up and running due to the complexity of the system, and there may not be another method of testing the product.  If you have multiple focused test stations you can just use one of the other stations at decreased output capacity instead of not being able to produce units at all.

Unless all your products have many of the same interfaces and test needs, you may be better off going with an approach that uses multiple stations that have the ability to test common types of device capabilities or interfaces.  For example, you may have multiple devices with a few common interfaces.  The table below shows multiple products with common test types and the equipment needed.

Now that we’ve arrived at the conclusion that trying to build a universal tester is not the best way to go, what are the other options?  One way to think about it is shown in this chart: 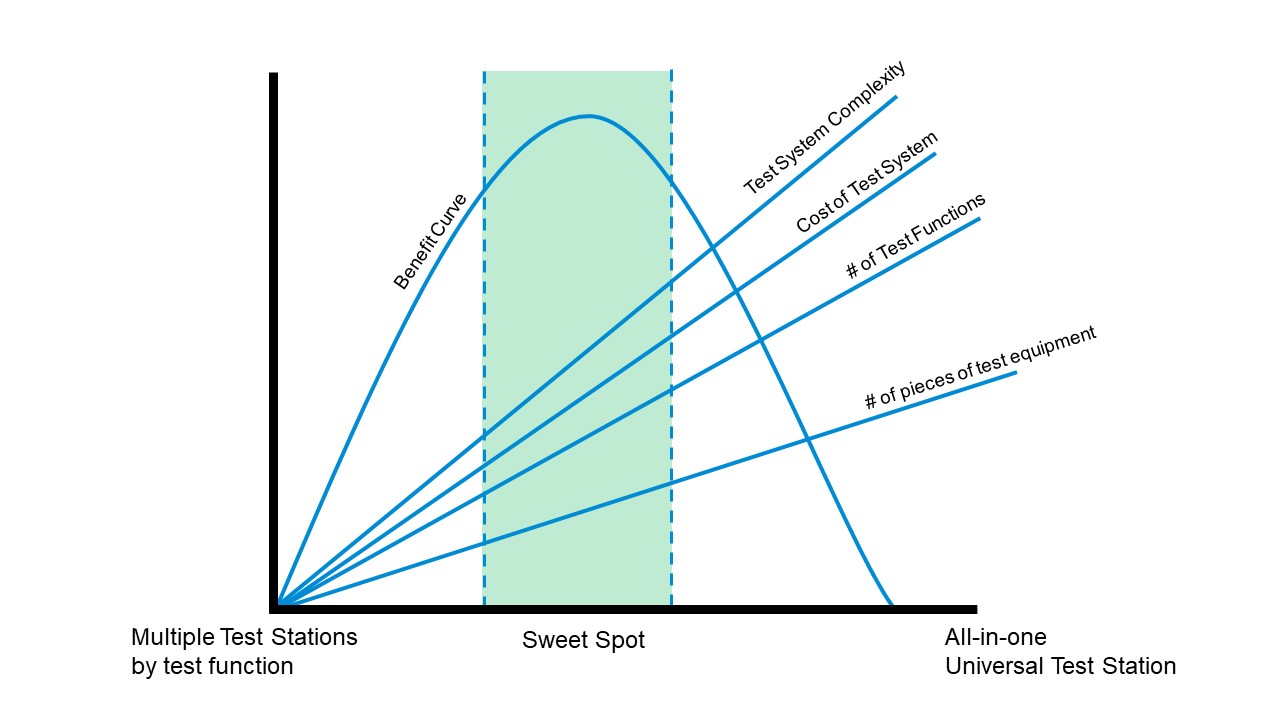 This graph provides a good visual of where the sweet spot is on the line.  Notice that four things increase as you move towards the all in one universal test station.  These four things are:

The benefit curve represents the best balance between getting added test functionality at the cost of complexity, cost, and pieces of equipment.

Now that you have a strategy, how do you get started?  Get to know your products.

This isn’t a perfect science, but it’s a good starting point.

Do you want help with your test strategy?  Reach out here to chat with us, or here if you’d like a custom solution assessment report.

I WANT HELP WITH MY TEST STRATEGY »